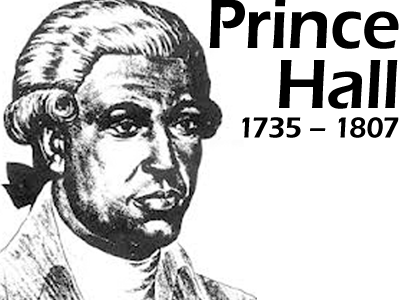 The fraternal tradition of freemasonry in North America began as a predominately White organization between the 16th and 17th century. Today, many African Americans belong to a group of Masons named after abolitionist Prince Hall, who is known as the Father of Black Freemasonry, and on this day, he and 14 other African Americans were initiated as Masons on March 6, 1775.

Hall, born in 1735, rose to prominence as a politically active abolitionist and activist who fought for the protection of free Blacks in the North from kidnappers and traders from the South. Other accounts also say that Hall petitioned for African Americans to return back to their native continent.

Hall was also involved in fighting for equal treatment of Black schoolchildren in comparison to their White counterparts. Serving as an educator himself, Hall’s contributions to the improvement of African Americans and their living conditions are vast.

In the 18th century, many Free Blacks in the North wanted the same access to platforms that Whites enjoyed, such as those in the political and social arenas. Freemasonry was one such area that was exclusive to Whites, although the group shared philosophies with Hall and had his admiration.

Just before the American Revolutionary War, Hall and 14 other Black men tried to gain admittance to Boston’s St. John’s Lodge. Turned away and causing a stir among Whites who wanted no parts of his group, Hall and the others went looking at other lodges.

On this day, Hall and the 14 men were made masons at Lodge No. 441 of the Irish Registry.

The occasion marked the first time men of color achieved the lofty status. A year later, however, the conflict between America and England escalated and the lodge dissolved. The move left Hall and his newly initiated brothers without a lodge of their own. Hall and the others were granted permission to meet as a lodge and perform masonic burial rituals but could not do other Freemason work. Known as the African Lodge, the group thrived although they still fought for acceptance from White masons.

In 1847, the group changed their name from the African Grand Lodge to Prince Hall Grand Lodge as it is known today. The group has members around the globe, with 5,000 lodges and 47 grand lodges all around the world.